Planning to get through the Corona Virus Crisis

It doesn’t really need to be said, but the last week has been more than a little bit chaotic and crazy.  Here in Germany we went from the economic experts saying on Thursday evening that shutting the Schools and Kindergartens would have drastic effects on everything to the State deciding that on Friday all the Schools and Kindergartens should be closed.  On Monday they decided at the end of the evening that they should close the shops without really saying when, which meant that on Tuesday we closed the Laufwerk. The more we restrict movements and contact with other people the longer it will take the Virus to spread dramatically.

On top of this of course is that up until the end of April all events are cancelled or postponed, training camps are being cancelled, fitness studios and swimming pools are closed.  This has resulted in a lot of conversations with athletes, changes of training plans (which I am still trying to get on top of), and adjusting the build-up to future events.

It’s a very trying time that we will hopefully come through without any major losses.  A lot of athletes are angry, frustrated, or stick in a land where they don’t know when they are coming home and can’t go outside to train.

Over this time I have changed my opinion multiple times about what I thought was going to happen, what I thought we should do, what my athletes should do, and what I should do (I was training for a 51km trail race).  Now I have started to put together a bit of a plan of attack.

The first things that we should do are:

One of my first ideas when we knew that Hamburg Marathon was going to be cancelled or postponed was to create a run for my athletes where they could in pace groups,  run on an out and back course, cover laps, get nutrition and drinks on each lap, and complete their 21,1 oder 42,195km. Now we are exactly one month away from that date, 19.04.2020 and it is not really possible to see if this will be possible, or a good idea.  However, it is one option of what we could do. I have put together a few tables for those that don’t want to read too much, and if you want more information feel free to read on. 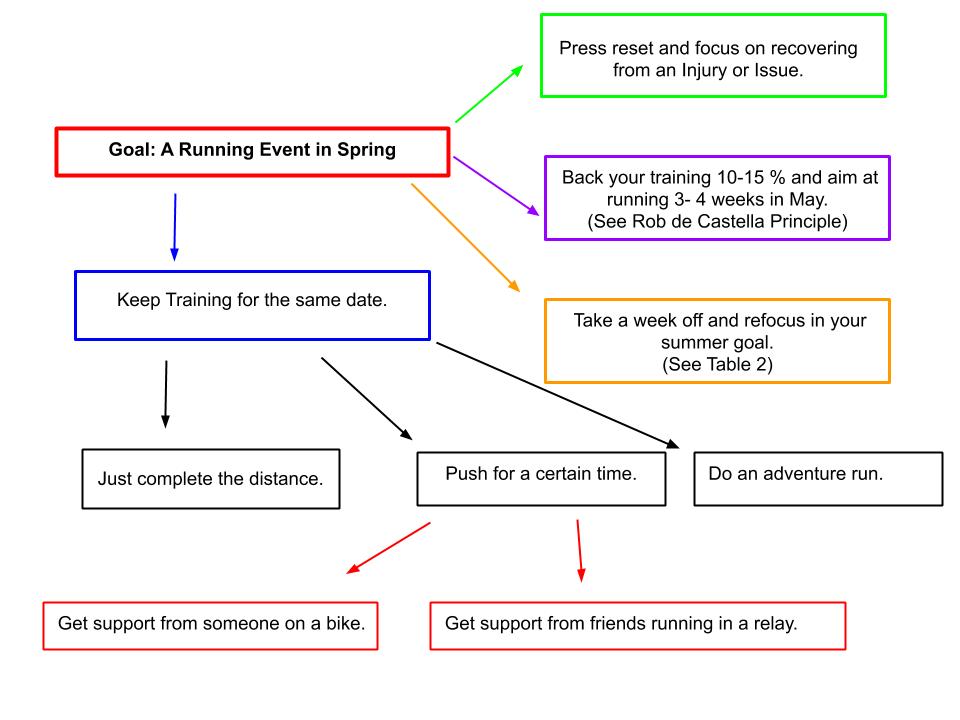 What are your options if your event that was planned for this month or April is cancelled or postponed?

A lot of people juggle running, getting treatment, and dealing with niggles or pain in the build-up for a big event, so it is the good chance to settle things down, because you do not need to punish yourself anymore.  Address your issues, get stronger, and then have a good build-up afterwards.

If you want to have a go at doing a good time there is a good way of getting support in that someone can ride with you and give you drinks and nutrition, or just to pace you.  Or you can get some friends to run as a relay, or just jump in or out while you keep doing circuits.

Another option is to do a bit of an adventure and run a longer course than you have been training for, a hillier one, or a point to point run, that either takes you from afar to back home, or takes you to a point or landmark.  This time the time is not important it is more about showing your body can carry you from A to B and that running is great. Sometimes we focus too much on time to evaluate whether your training was worth it out not.

If you feel better, move better, and are happy then everything was done right.

When you know already that there is a race or races lined up in summer maybe you could just draw a line through spring, have a little break, and then start a longer build-up that doesn’t ramp things up as quick.

Rob de Castella was a legendary runner in the 80s and early nineties.  In 1981, he won his first major marathon when he won the Fukuoka marathon in Japan. Regarded as the unofficial world title, De Castella triumphed in a remarkable 2 hours, 8 minutes and 18 seconds - a remarkable five seconds off the world best time. There was more to come. De Castella looked invincible in 1983, and this was vindicated with his number one ranking in the world marathon list. He won the Rotterdam Marathon classic in April, and the World Championship marathon in Helsinki four months later. He also set the world record for the 15km road run.

He trained consistently week in week out and year in and year out.  His methodity was that you should just put in the same work week in week out, and if you could do that you would be able to produce a very good result due to the constant workload that you have absorbed.  He did manage to do a LOT of training, but he did the same week in and week out.

Another person that believes strongly in maintaining a seemingly constant training plan and then ramping it up before the goal race is Tim Kerrison, the head trainer of Sky Ineos (formerly Team Sky).  He tries to maintain that the riders or Triathlete Cameron Wurf (who he also coaches) maintain 3 solid weeks with little deviation before a slightly easier week, and then repeating it again. The theory is that it is easier to kick up 10-15% to reach your peak than starting at a very low point.  They still have time off after the A race or peak.

However, since nobody should be peaking yet because you haven’t had a chance to reach their A race  this is an option. Back it over a little, keep the pot on simmer, and then turn it back up 4-6 weeks later. 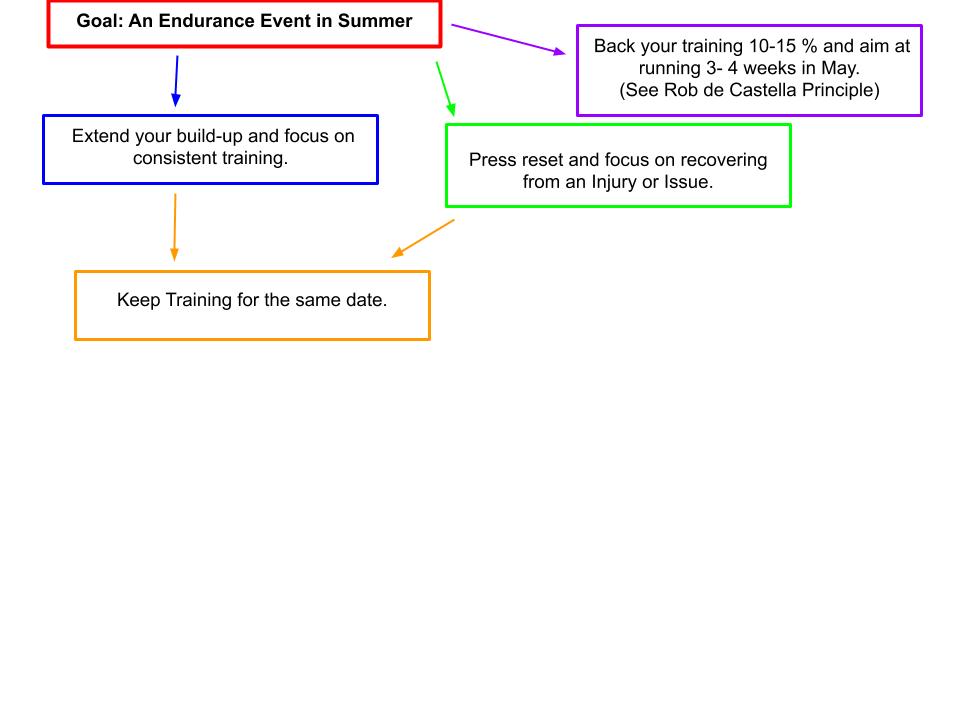 If you are just building up for Summer anyway then you don’t have as much stress.  A lot of you would have had a little build-up in spring and then started your Summer build-up   Whether or not these go ahead exactly as planned is still up in the air, but right now you should keep training for the same date.

Right now because there will be no racing you can stick to the three points from earlier:

Don’t stress yet.  Just get into some consistent training and start feeling good.  If no races go ahead you will still be fit and maybe less stressed than those doing nothing.